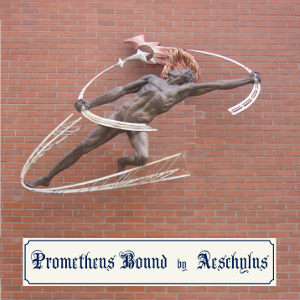 LibriVox recording of Prometheus Bound (Browning Translation) by Aeschylus. (Translated by Elizabeth Barrett Browning.) Read in English by Expatriate. Whether or not it was actually written by Aeschylus, as is much disputed, "Prometheus Bound" is a powerful statement on behalf of free humanity in the face of what often seem like the impersonal, implacable Forces that rule the Universe. As one of the most compelling rebel manifestos ever composed, it has appealed not only to the expected host of scholars of Greek drama, but also to a fascinatingly free-spirited array of translators, especially since the early 19th century; Percy Bysshe Shelley, Henry David Thoreau, and activist-poet Augusta Webster are among those who have tried their poetic and linguistic powers at rendering it into English. Elizabeth Barrett Browning published not one but two completely different translations of it, the first in 1833 when she was twenty-seven years old and the second eighteen years later. It is this second, far greater, translation presented here. - Summary by Expatriate For further information, including links to online text, reader information, RSS feeds, CD cover or other formats (if available), please go to the LibriVox catalog page for this recording. For more free audio books or to become a volunteer reader, visit LibriVox.org.